Structural Variations (SVs) are the various genetic changes or at times mutations in the chromosomal structure caused by a variety of rearrangements. There are hundreds of thousands of these SVs in each genome and are responsible for genetic diversity, phenotypic traits and diseases susceptibility. Most of the last two decades focused on detecting single nucleotide variations (SNPs) as these point mutations are responsible for causing 85% of Mendelian diseases. Genomics community has been recently focused on developing a better understanding of structural variations and their role in phenotypes and diseases. Detection of large mutations >1kb continue to elude most of conventional methods of detection. Structural Variations (SVs) using Next generation sequencing is fast becoming the method of choice. NGS data analysis for large and complex SV detection, however, is extremely challenging. A recent review by Ye et all (2016) lists at least 25 different software for SV detection.

This method depends on the read pair insert size and read mapping pattern on a reference genome. A number of statistical algorithm and noise filtering techniques are being used to circumvent the issues posed by large number of repetitive sequences in an eukariyotic genome that causes incorrect read mapping.

Most structural variation generate split read mapping at the point of break or insertions. These fraction of split reads are used to detect the precise location, size and type of SVs. This method is powerful in detecting small to medium SVs with single base accuracy of detecting breakpoints, however, it is not as accurate when detecting large structural variation or those in repetitive regions due to its local mapping nature.

Sequencing is a random process and ideally should generate an even coverage across all regions of genome baring the effect of GC bias of short reads. Read mapping density is proportional to number of copies of a gene or locus in a given genome. Any changes in read depth caused by increase or loss of  reads is used to detect SVs. Read-dept method is very effective for detection of large copy number variations (>1kb). Again just like other methods above, duplication or deletion in highly repetitive region of genome are difficult to detect by read-depth method.

Most short read methods based on assembly for SV detection use a reference assisted approach. Reads with missing pair or unmapped reads after a reference alignment are collected and a local assembly is performed to generate contig that represents the actual local structural variation. This is in fact method of choice for 1000 Genome project. 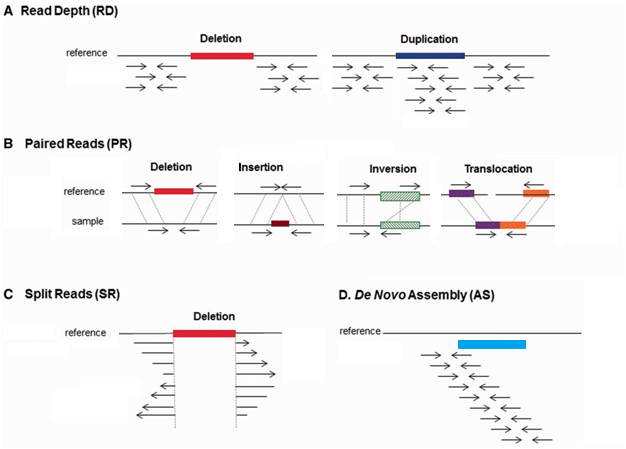 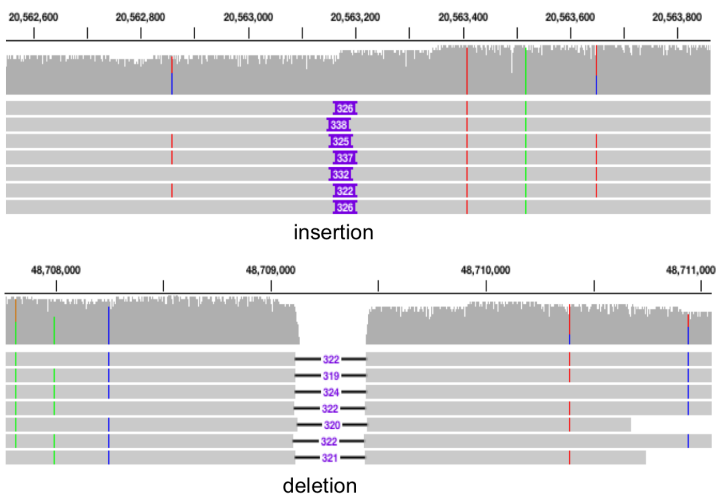 Optical mapping technique like Bionano genomics further enhance the ability of NGS based SVs to detect large and complex SVs. Optical mapping generates images of megabase size DNA molecules that in turn produce genome maps. Sophisticated software then use the NGS denovo assemblies and optical genome maps to detect structural variations with a high accuracy of >95%.

Two varieties of sunflower are mapped with Bionano DLS and de novo assembled into extremely long maps. Large structural variants between the two varieties are identified. 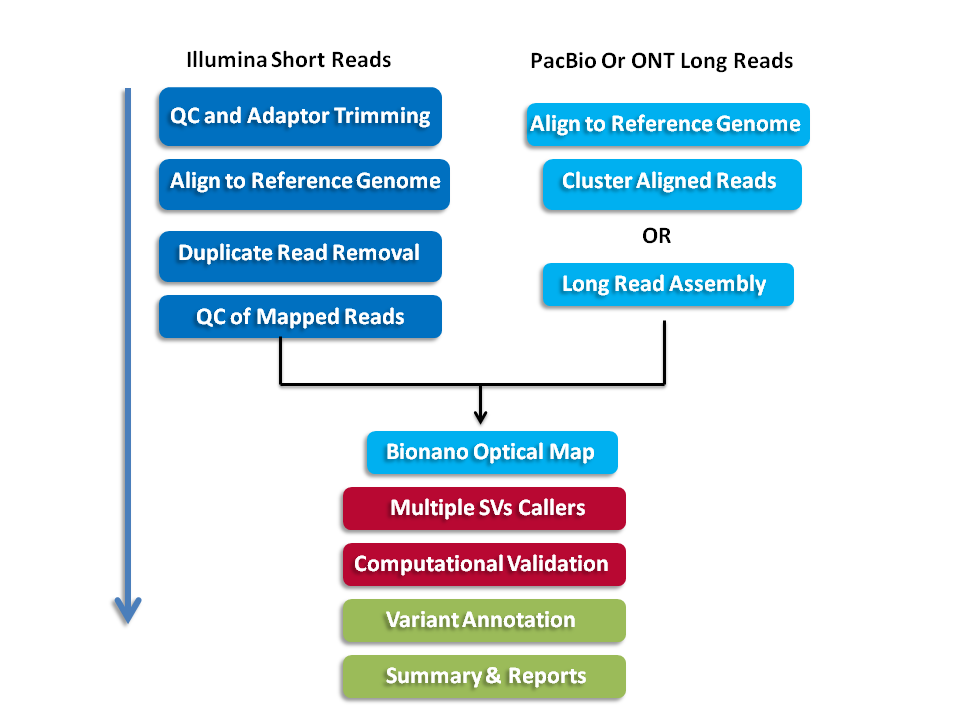 At 1010 Genome, we are happy to hear about your project and provide consultation. Get in touch with us today